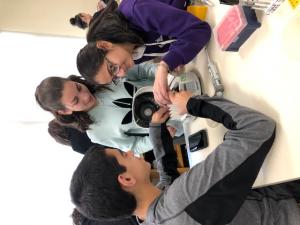 Biodiversity is essential to the stability of all ecosystems. Ants have an important impact in ecosystem biodiversity, as they make up a huge part of the overall animal biomass, play an important role in seed dispersal, and act as little "engineers" in their habitats. It is estimated that there are over 12,000 species of ants around the world, with over 1,000 different species in the United States. There are estimates that over one quadrillion ants are alive on earth. Ants have a direct impact on other living organisms, including humans. They act as decomposers, some feed on other insects, such as the destructive aphids, and their digging helps to aerate soil. These traits cause ants to have a powerful impact on agriculture. Our goal for this campaign this year is to take what our Team has learned from last year’s project (The Biodiversity of Beetle Species in Forest City Community Park), and use our background and skills to learn about the different ant species in this area. We were a