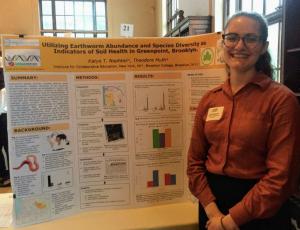 Investigating the Origins of Invasive Earthworms in the Soil of Public, Private, Residential, and Commercial Areas of Greenpoint

This proposal intends to utilize earthworm bioindication to analyze the varying contamination levels in Greenpoint soils with varying human disturbances. The testing locations will be classified due to whether they are public (frequent disturbance) or private (infrequent disturbance). These locations will also be reviewed for distance from waterfront because New York City’s invasive worms most likely originated from seaports and fishing areas (Gift, 2009). The amount of present earthworms as well as the biodiversity of populations of each location will be compared statistically along public/private locations in the same residential or commercial classification. It is hypothesized that private areas will have a lower count of earthworms than public areas and residential areas will have a lower earthworm count due to increased disturbance and introduction of earthworms in public and commercial sites.